zapytanie o cenę
The Mach-Zender interferometer consists of two semi-reflecting plates  (beamsplitters) and wo mirrors. A light beam is divided into two, after  which both beams are recombined by eans of a semi-reflecting mirror. One  of these beams will be named the Reference beam, while the other will  allow us to take measurements on the vacuum index or plate thickness.

A thin slide is added, followed by a thicker slide, to one of the arms of the Mach-Zender interferometer. This slide will introduce into the system a medium with a different optical index, which will modify the optical path of the beam passing through it. We thus propose viewing the impact of this modification on the interference figure. In this case, the beam propagated on arm 1 crosses a thin slide that modifies its optical path with respect to the previous case. This new distance is written as : D’1 = D1 + e (n-1), where n stands for the slide index and e its thickness.

The Mach-Zender interferometer is a two-beam interferometer. It operates  as follows : The coherent light beam from a laser source is divided  into two partial beams by an optical component. These beams follow different paths, are deflected by mirrors, before coming together again  and being superimposed by another optical component. Superimposition of  light waves leads to an interference image. If the optical path, i.e.  the product between the refractive index and the geometrical path, of  one of the beams varies, then a phase shift will occur with the second  beam. The result is a modification of the interference image, allowing  conclusions to be drawn regarding the modification of the optical path.  Unlike Michelson’s interferometer, partial light beams are not reflected  on themselves but each follow a specific path until they meet again.  Consequently, measurements taken on transparent materials, as for  example measurement of the refractive index, are easier to understand  and thus clearer 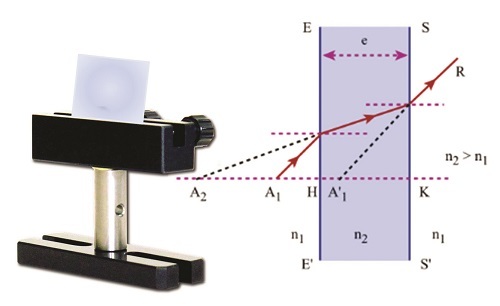